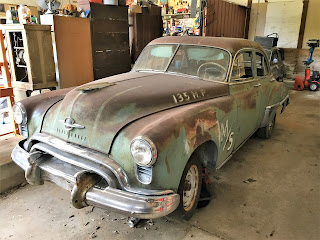 In hindsight, the 1949 Oldsmobile 88 series cars were simply the match thrown on to the gasoline of post-war youthful exuberance. It's new OHV 303 cubic-inch V8 engine trumped the legendary Flathead Ford by 100 horsepower, and when paired with the (relatively) lightweight body shared by the 76 and 88 series cars, became a race-day performer, winning both NASCAR stock car races and local drag races. Labeled by some as America's first musclecar, it also was the subject of America's first rock 'n' roll song, "Rocket 88" by Ike Turner and Jackie Brenston.

The car shown here is a 1949 (standard) Sedan, which had lived a former life as a bracket racer in the Midwest. Driven by Nebraska racer Andy Rager, the rear quarter panel is decorated with "Go Granny Go!," a poke at the sedans humble appearance.  Andy Rager was a cousin to Nebraska Hot Rod Racing Association Hall of Famer Bob Rager, whose son Roger was CART and Indy 500 driver and the 1980 USAC Rookie of the Year. Livery proudly proclaims the stock 135 horsepower the 2 barrel 303 Rocket engines came with, but at some time this car was updated to a 324 block with 303 heads. Period but rusty headers are in place, with exhaust cutouts underneath the car. The car probably raced up until the early 1960's, given that it ran in the NHRA M/S class, determined by a formula of weight and horsepower. Despite its staid looks, this would have been one of the fastest cars on the streets back in the early 1950's. 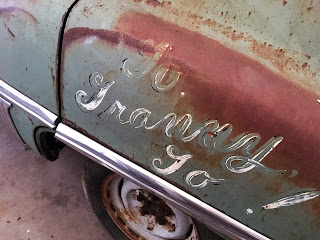 The interior of the car has been stripped, although the dash and its spartan gauge arrangement are still in place. A floor shifter controls the 4-speed Hydramatic transmission. Floor pans and trunk are rusty, but the full frame on the car remains solid. The engine is in place, though a four barrel intake sits in the trunk. It is a project, but a very worthwhile one. 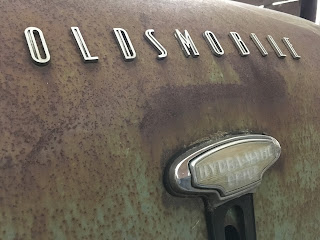 The draw of course is the great livery and faded (rusty!) paint job that pretends nothing. For authentic hot-rodders or fans of the Race of Gentlemen, this is the desired aesthetic. The car as it sits is an indisputable race relic, waiting for the rest of its history to be unearthed. Most importantly, it comes with a clear title dating back to 1955 and wears Nebraska registration from 1966.

Posted by bestbarnfinder at 6:16 AM 2 comments:

Sometimes we just come across cars which are finally, and completely... done.
Bow your collective heads, dear readers, and mourn the passing of one such car...a car that cannot be reasonably revived, nor may ever be sold (given it's asking price.)

Let this poor soul pass through the pearly gates and find eternal rest, lest the boat trailer live on and find freedom from its long burden! 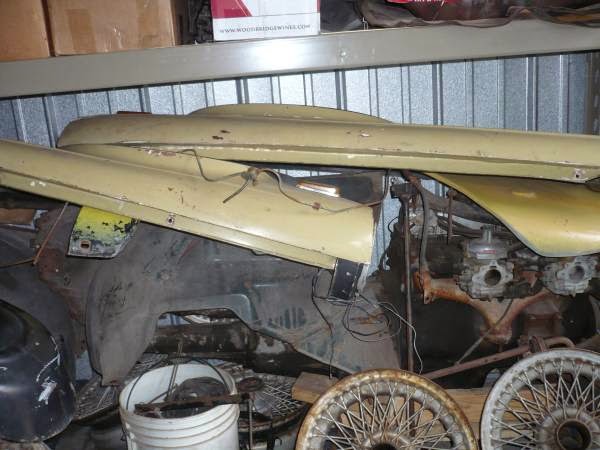 We would wish upon thee a noble Viking funeral, but we think there is not enough 'twould actually burn... 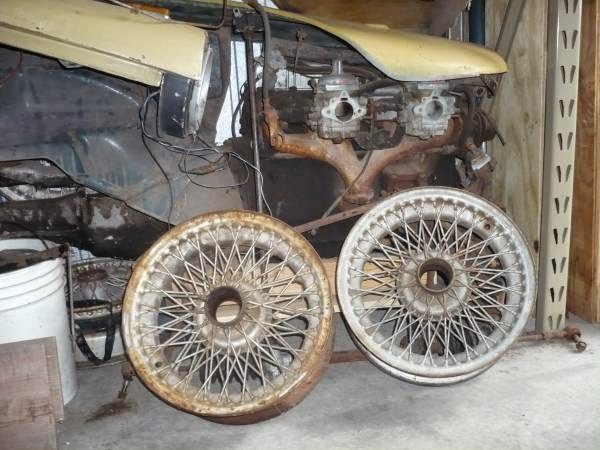 And the epitaph will read, as with so many others, "Restoration Started"....

Not so very long ago, we didn't care much at all for aircooled VW's. Many of you cannot imagine a time when just about every 12th car you saw on the road was a Bug. But, given time and rarity, and the diminishing memories of feeble acceleration (offset by that distinctive smell of aged Karmann rubber mats and interior)...well...we kind of like them now. 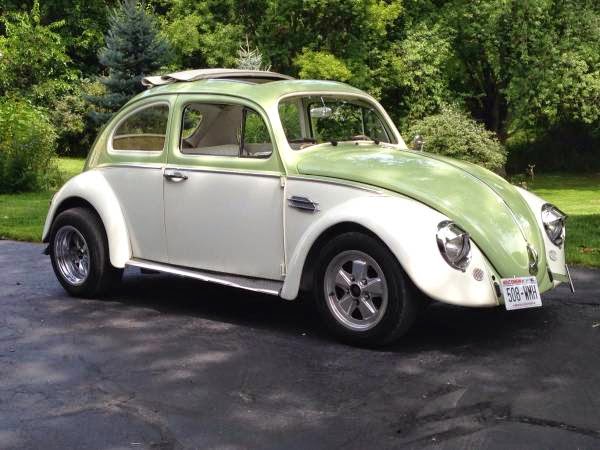 Especially the rollback soft-tops: These evoke earlier times of Old Speed So Cal racers. Gnarly dude. Can you dial in KROQ on that old Sapphire AM/FM? We digress. 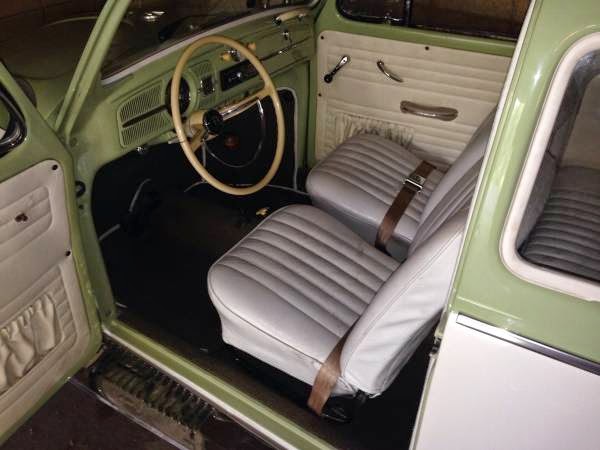 Lots to like here. Nice two-tone paint, in and out. A clean looking twin-carb 1700cc with open air cleaners to give that distinctive intake noise. And the presumption that all of it was done on a decent, rust free pan. The stuff we don't like comes off easy: stick on fakey-fender extractors, headlight shades and the extra-wide wheels. We'd consider a set of Porsche Fuchs or a simple chrome reverse. We'd think about putting bumpers back on too. But that's just us.

The seller is motivated and it's fairly priced. She lives in the cold so she'll be put away soon. Buzz us for more info at The Barnfinder!

Posted by bestbarnfinder at 5:30 AM 2 comments:

Things got wingy with Chrysler in the early 1960's. And they chose one of their longest running and most elegant models to break the mold...in a big way. Concept cars penned by futurist designer Virgil Exner from the late 50's explored the theme on the sedan chassis, with the penultimate version coming in 1961. 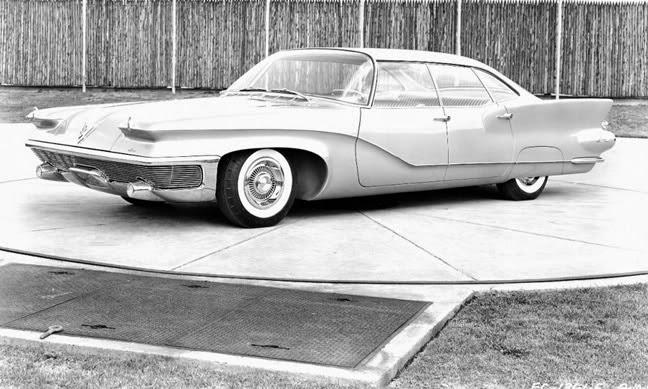 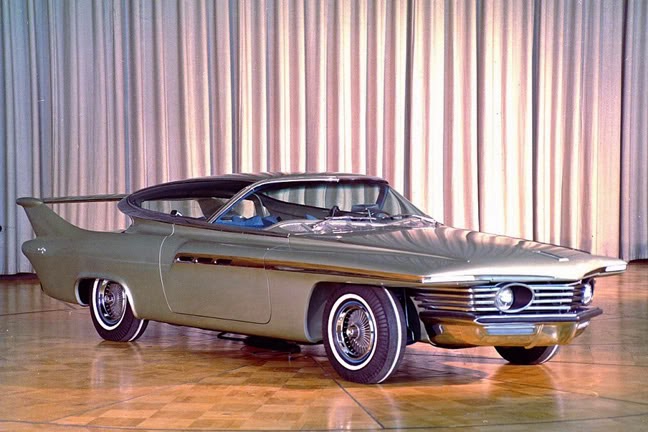 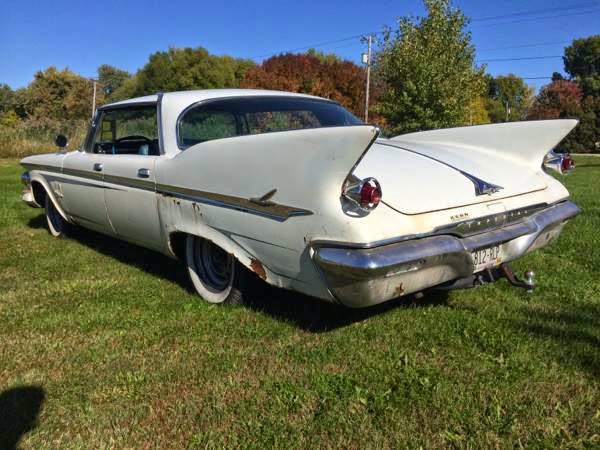 The car was long. In fact, the longest non-limousine car made that year. It was low. And it was wide.
The sloping trunk lid (in this case shown without the optional faux spare tire bulge) only accentuated what was the ultimate expression of jet-age technology from the previous decade: the tailfin. 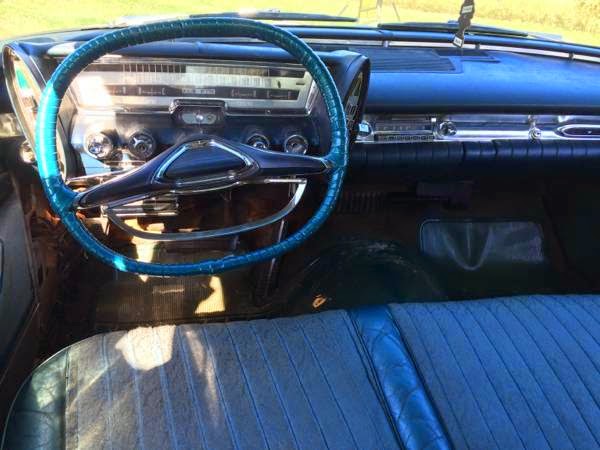 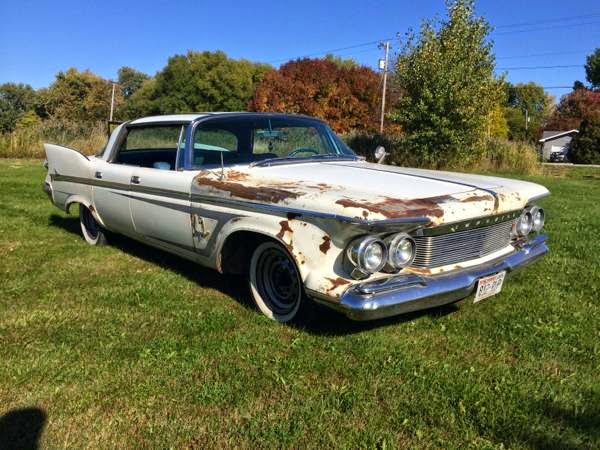 TFloating headlights were a subtle touch to bring the front end up to avant-garde status. 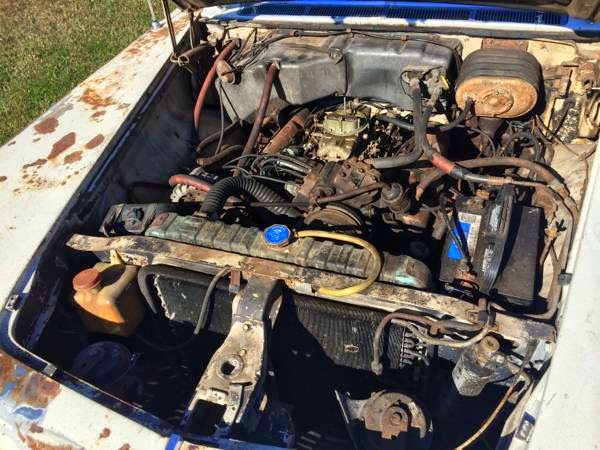 This one runs and drives, and needs some obvious maintenance. While the coupes and convertibles have already been recognized and appropriately valued, the sedans remain surprisingly affordable and available. It is a cheap way to enjoy a snapshot of an era, and the ultimate expression of a futurist designer's vision at an affordable price. Available at $4000. Contact the Barnfinder! if you have more interest.
Posted by bestbarnfinder at 5:30 AM No comments:

While most American car makes can point to 1957-58 as a high watermark in their design, Ford's T-bird sadly cannot claim the same. Too ahead of it's time, or clinging too much to it's past...whatever the reason... the swoopy modern finned bodywork suffered with an ungainly angular and elongated C-pillar and roofline, betraying the sporting image it strove to imply. 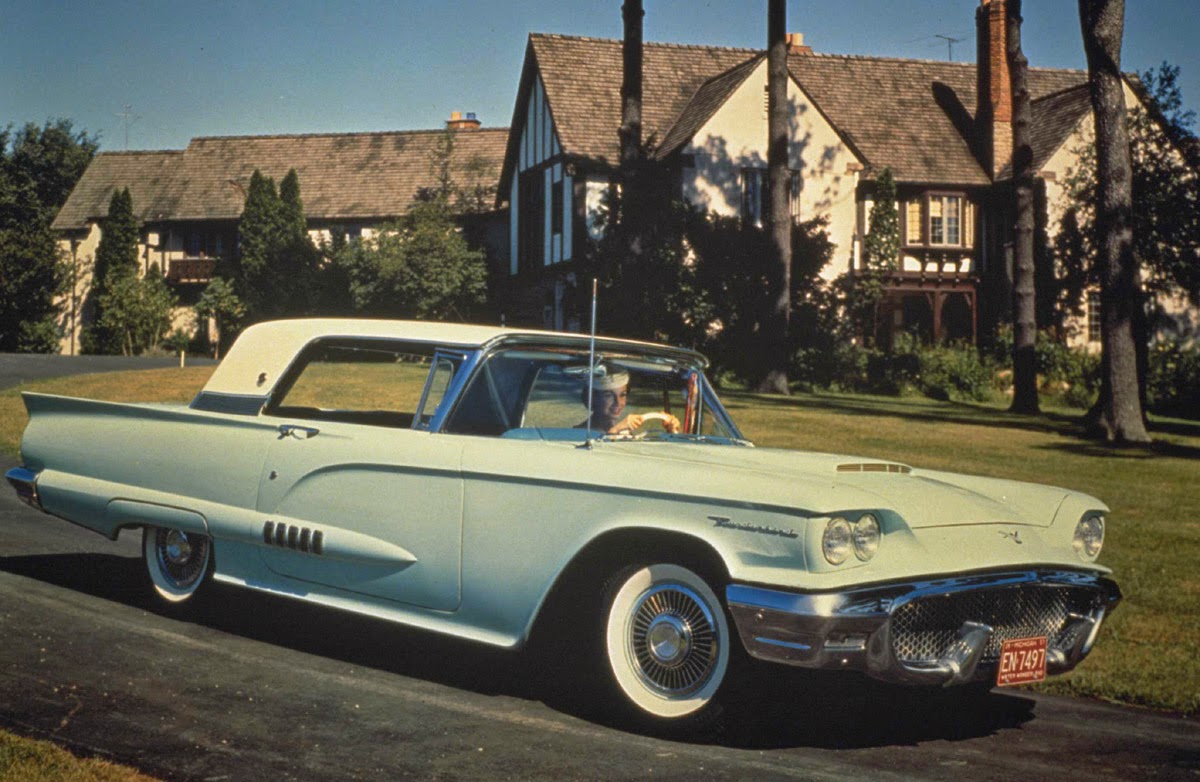 Bereft of this awkward roof element, the convertible T-bird was a bird of a different feather. Rodders have latched onto this weakest link, and the '58 'Bird is a prime candidate for a chop. Call it the customer re-tailoring the suit to better reflect the taste of the times. 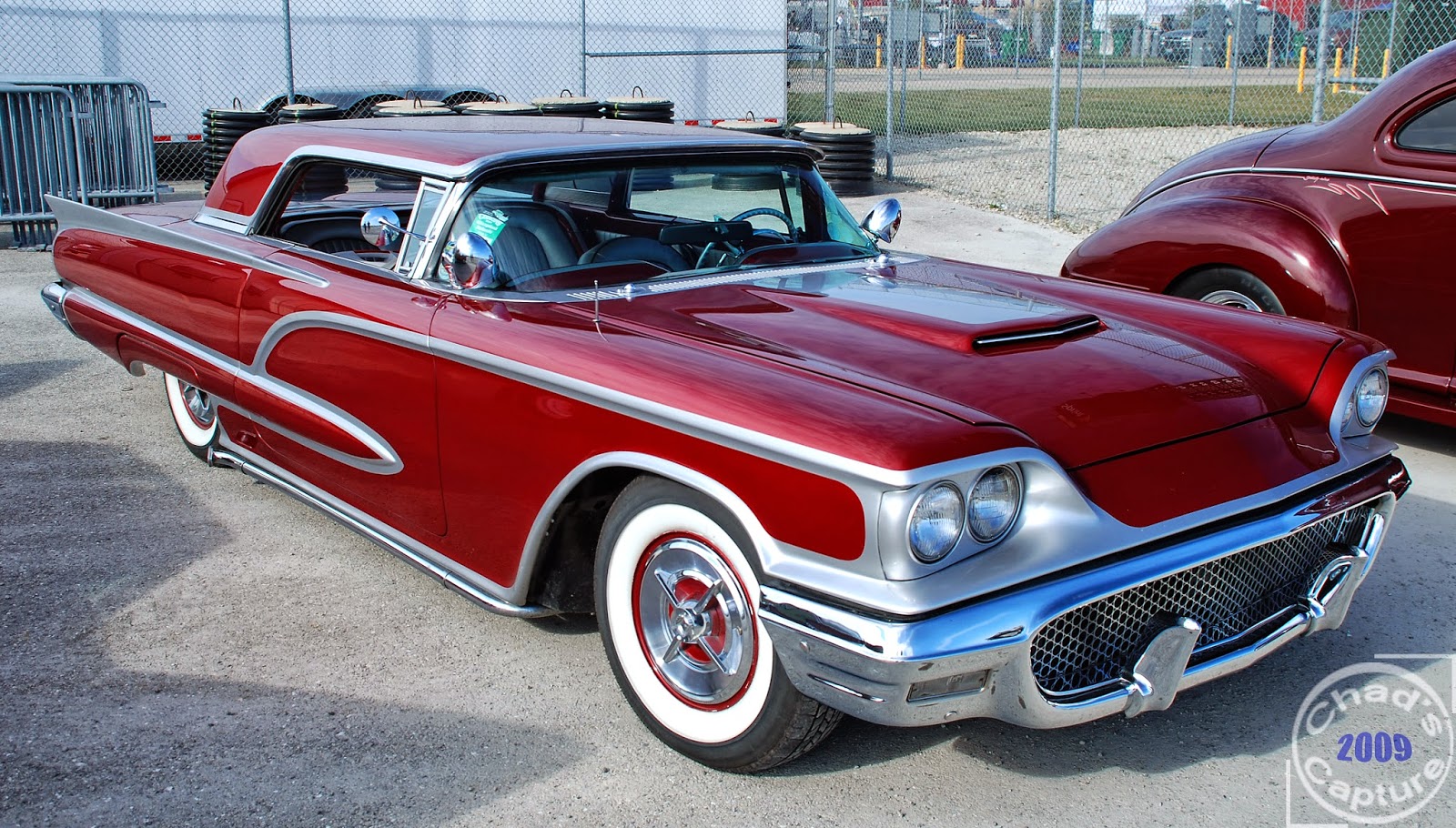 Nowadays, of course, every T-bird deserves to be saved. The long coupe body is finding new fans with a thousand different interpretations of the long lead sled. Which is why this engine-less rescue makes sense to a whole lot of people who would just start from scratch anyway: 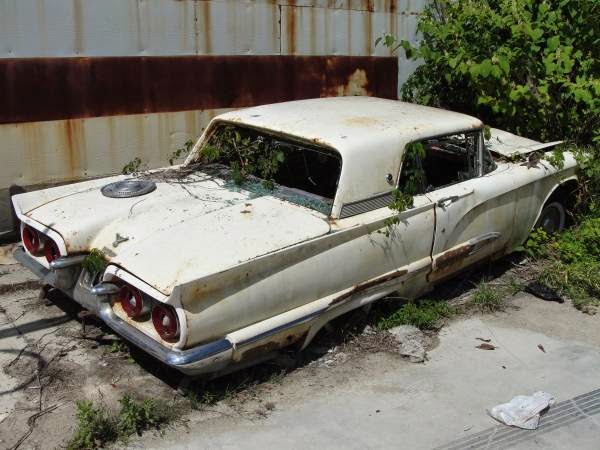 At $800 asking price, you are just above scrap value on this old heavy cruiser. Hopefully it can find a new home... and perhaps a bit of reinvention.

4for$1Ok: An MGA exploded all over a yard...and no one cared.

Fortunately no one was hurt when a highly pressurized four-car hoard of MGA parts and cars could no longer be contained by the seller, who was eventually forced to list them for sale. These four MGAs are offered in a package sale for $10,000 or offer. 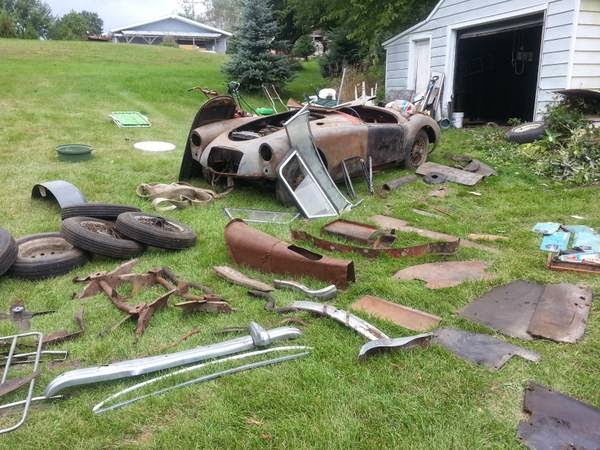 We just can't figure out MGAs. Was there ever a more universally admired shape set forth by BMC upon our shores? Why then have prices continued to languish on these classy roadsters, imperiling ambitious projects such as the one above to the scrapyard? 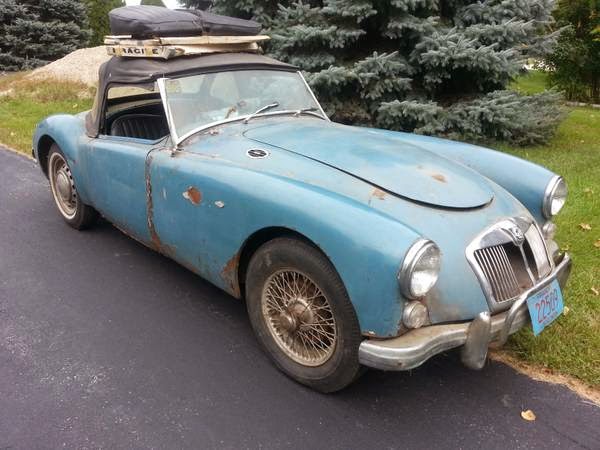 Furthermore, there can hardly be a more straightforward subject for an aspiring restorer to build: simple body-over-frame construction and a stout inline 4 motor, with an active aftermarket parts supply. Even when they do break ( which is alarmingly often), it is usually something fundamental and simple. These are the perfect candidates to teach some high school shop class the basics of locomotion. 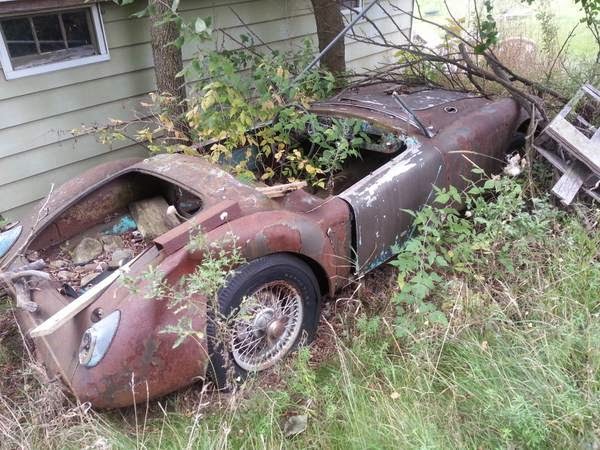 We love rust. Can you believe there are actually car crafters out there that have to SIMULATE it to get that oh-so-fashionable look? Not us here in the Midwest. We have the real thing, 100% organic. 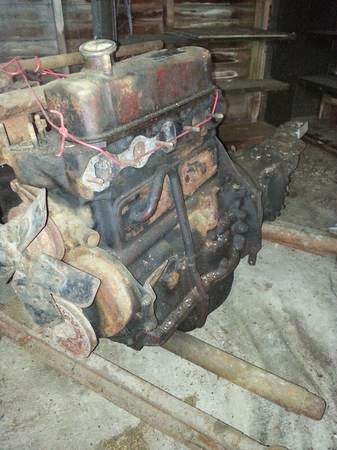 Somebody please save these puppies. They would fill up an overseas shipping container quite nicely!

Email the Barnfinder! for more details.


Posted by bestbarnfinder at 3:23 PM No comments:

Some cars are just immune to the recent run up in collector car prices, despite their innumerable charms.  Post-Bugeye Austin Healey Sprites -as a species- seem especially resistant to appreciation, despite their classic lineage.


There is a lot to love about these classic cars. And the value of this one has seemingly not wavered in 20 years or so. It is still a $3000 European sports roadster. Just like it was in 1994.


Nothing here will bite you too hard, and the seller seems upfront about the limit of his desire/capability to get this car back on the road.


The seller claims that the car will not disengage the clutch despite a rebuilt master and slave cylinder.
He cites the clutch pressure plate springs. We think it may not be the springs, but the clutch face rusted to the flywheel from extended sitting. It might pop loose with bump starting the car. But that is speculation. Either way, here is a chance to give that son/neighbor kid/nephew a great basic education in straightforward auto mechanics. 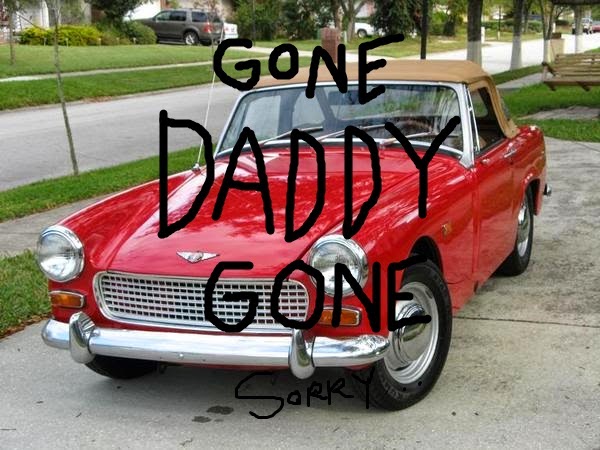 The seller claims no rust, but we know that might not be descriptive of PREVIOUS rust repair (aka Bondo). But really, it's hard to complain about a complete car with nothing but upside potential ahead of it. We hope it finds a good home.
Posted by bestbarnfinder at 3:19 PM No comments:

Every notice that the cars on Barnfinder aren't around long?
Thats because they are screaming deals!
Get the inside line and early notice by subscribing today.